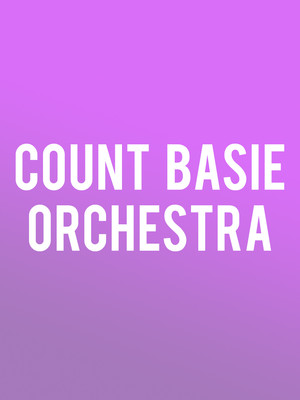 One of the most prominent jazz performing groups of the swing era, the Orchestra continues to wow audiences today.

Out On The Road

The Count Basie Orchestra is a 16 to 18 piece big band, one of the most prominent jazz performing groups of the swing era, founded by Count Basie. The band survived the late '40s decline in big band popularity and went on to produce notable collaborations with singers such as Frank Sinatra and Ella Fitzgerald in the '50s and '60s. The group continues to perform and record even after Basie's death in 1984.

After Basie's death in 1984, the band has continued to play under the direction of some of the players he had hired, including Eric Dixon, Thad Jones, Frank Foster, Grover Mitchell, Bill Hughes, and now drummer and arranger Dennis Mackrel. It continues to release new recordings, for example, Basie is Back from 2006 which features new recordings of classic tunes from the Basie Orchestra's back catalog, including April in Paris and even the band's early hit One O'clock Jump. The group also continues to produce notable collaborations, such as with singer Ray Charles in Ray Sings, Basie Swings of 2006, and with arranger Allyn Ferguson on the 1999 album Swing Shift.

Sound good to you? Share this page on social media and let your friends know about Count Basie Orchestra at Benaroya Hall.