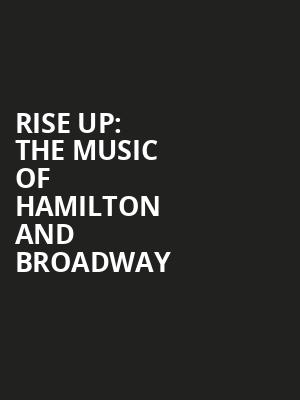 Photo by israel palacio on Unsplash

Rise Up: The Music of Hamilton and Broadway

Hear the music of Hamilton and more in this unmissable concert!

Why See Rise Up: The Music of Hamilton and Broadway?

Rise up: ears up!

Hamilton fans rejoice as this fantastic concert rolls into town, showcasing the finest vocal talents from Seattle performing the iconic hits from Lin-Manuel Miranda's world-dominating musical alongside tunes from some of the best modern Broadway musicals including In The Heights, Dear Evan Hansen, Wicked and many more.

From its sold-out engagement at the Public Theatre to the world, Hamilton is one of the most successful musicals of all time. Telling the story of the 'ten-dollar founding father' Alexander Hamilton through a mix of spoken word, rap, r&b, and traditional Broadway, writer Lin-Manuel Miranda turned the genre on its head, defining what a contemporary musical can be.

Sound good to you? Share this page on social media and let your friends know about Rise Up: The Music of Hamilton and Broadway at Benaroya Hall.