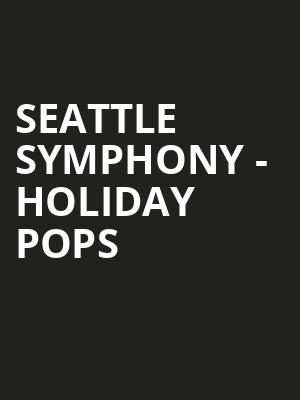 Get in the holiday spirit with the Seattle Symphony and N'Kenge!

another year of Holiday Pops

Join conductor Stuart Chafetz, Broadway star N'Kenge and Seattle Symphony for another fun-filled Holiday Pops program! This year's Holiday Pops kicks off the season with humor, joy and holiday warmth, featuring holiday classics and some traditional favorites which will leave you feeling more festive than ever!

Inviting special guests to join them every year, this year's Holiday Pops features the insanely talented N'Kenge! N'Kenge is an Emmy-nominated actress and singer who originated the role of Mary in the hit Broadway production of Motown: The Musical. Join her as she sings alongside the Seattle Symphony this festive season!

Sound good to you? Share this page on social media and let your friends know about Seattle Symphony - Holiday Pops at Benaroya Hall.