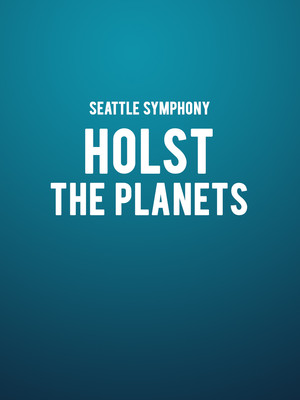 Spend a night under the stars with the Seattle Symphony

It's time to blast off into the cosmos with the Seattle Symphony as they take you on a celestial adventure with Gustavs Holst's enduringly popular The Planets. From the bombast of Mars, Bringer of War to the lively joy of Jupiter, let the symphony, led by Jonathon Heywood, inspire and delight you

Completed between 1914 and 1916, The Planets is by far the most popular of Holst's works (a fact that troubled him in later life). Based not around the Roman Gods as is easily assumed, each planet's character and sound comes from Astrology, an idea that fascinated Holst at the time. Each movement seeks to evoke the emotion and passion that each planet elicits in us.

The evening also features a US Premiere of The Shark Catcher from rising talent Hannah Kendall and a performance of Haydn's heavenly Symphony No.98.

Sound good to you? Share this page on social media and let your friends know about Seattle Symphony - Holst The Planets at Benaroya Hall.