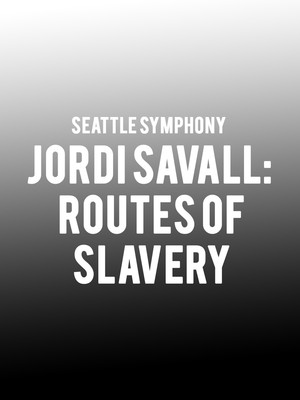 It's both a timely reminder of our ignoble instinct to subjugate and a moving gesture of reconciliation.

An Evening Of Soul-Stirring Early Music

An influential champion of early music, i.e. the sounds of the Renaissance and early baroque period as played by period instruments, Jorfi Savall turns his talents to the music forged during the upheaval and oppression of slavery in Europe, Africa and the Americas. The Spanish conductor joins forces with the Seattle Symphony and Early Music Seattle for a special one-night-only concert filled with the songs that held together communities and helped retain the humanity of displaced people as sonic rays of hope in the face of unimaginable darkness.

Savall weaves together music, dance and spoken word, spanning centuries and tracing the dispersion of African culture from its roots in the continent to its evolution in the modern western world. Guest performers include Malian musicians Kasse Mady Diabate and Ballake Sissoko, as well as the Temembe Ensamble Continuo, The Fairfield Four, La Cappella Reial de Catalunya and Hesperion XXI.

Sound good to you? Share this page on social media and let your friends know about Seattle Symphony - Jordi Savall: Routes of Slavery at Benaroya Hall.