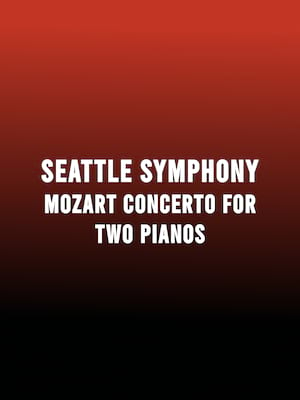 Wigglesworth has established himself as a sought-after all-round musician

A master's concerto on two pianos

Originally written by Mozart to perform with his sister Maria Anna, the concerto was composed in 1779 and later played in concert by Wolfgang himself, along with his pupil Josepha Barbara Von Aeurnhammer. Performer Ryan Wigglesworth is making a name for himself as one of this generation's most in demand composers, conductors and pianists, including various engagements with the BBC Symphony, Chamber Orchestra of Europe and many more. Fellow pianist Marc-Andre Hamelin is equally accomplished, with a decorated career including 9 grammy nominations and recipient of a lifetime achievement award from the German Record Critics Association.

Sound good to you? Share this page on social media and let your friends know about Seattle Symphony - Mozart Concerto for Two Pianos at Benaroya Hall.