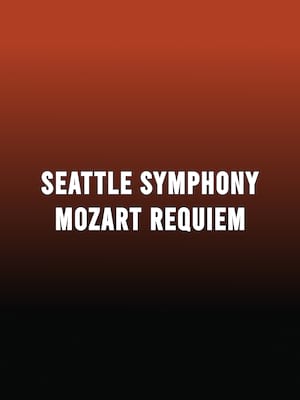 impressive singing from the soloists and chorus, virtuoso instrumental performances from the orchestra.

October will see the Seattle Symphony Orchestra perform a truly masterful rendition of Mozart's final work, the Requiem Mass in D Minor (K. 262). The hauntingly beautiful piece was left unfinished at the time of his death in 1791, but completed the following year by Franz Xaver Sussmyer. An moving work of emotive counterpoint, the Seattle Symphony Chorale deliver a stirring rendition of this masterpiece.

Much legend exists around the Requiem, one notable story being that it was commissioned by an unknown messenger, leading Mozart to believe he was composing it for his own funeral. The concert will also feature performances of Toru Takemitsu's Requiem for String Orchestra and Karl Amadeus Hartmann's Concerto Funebre. The conductor is Bach Collegium Japan founder Masaaki Suzuki, winner of the 2012 Leipzig Bach Medal and the 2013 Royal Academy of Music Bach prize.

Sound good to you? Share this page on social media and let your friends know about Seattle Symphony - Mozart Requiem at Benaroya Hall.