Sorry! You missed Seattle Symphony - The Best of Quincy Jones at Benaroya Hall 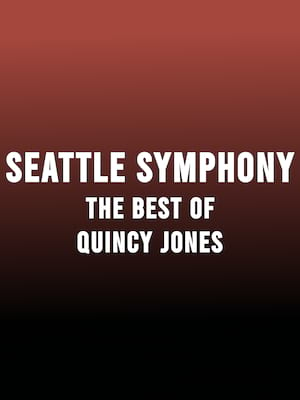 His work always balanced musical complexity and mass appeal, and he had a special gift for recording great singers, including several of the best in history

Why See Seattle Symphony - The Best of Quincy Jones?

In February Seattle Symphony Orchestra performs a concert in honor of one of the greatest innovators in contemporary music, Quincy Jones. Jones' prolific legacy as a producer, songwriter and performer has created genre-defining shifts across pop, soul, jazz, funk and hip-hop, leaving an indelible mark on the modern music landscape.

From his work as a composer, arranger or producer with greats such as Michael Jackson, Count Basie, Aretha Franklin and Louis Armstrong, to his own solo output as a bandleader and soundtrack composer, Jones' record 28 Grammy Awards (the most Grammys for a living person) is testament to his footprint on contemporary music. Seattle Symphony's tribute performance is led by conductor James Buckley, with guest performers including vocalists Shela, Jonas Nilsson and more.

Sound good to you? Share this page on social media and let your friends know about Seattle Symphony - The Best of Quincy Jones at Benaroya Hall.