Sorry! You missed Seattle Symphony - The Music of John Adams at Benaroya Hall 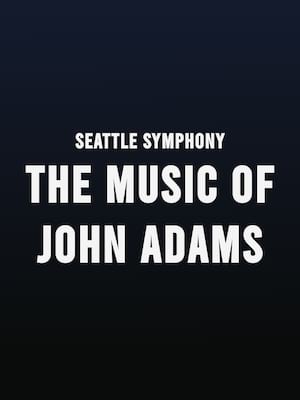 One of our most important contemporary voices

Why See Seattle Symphony - The Music of John Adams?

A celebration of a modern master

Seattle Symphony celebrates a modern American master composer, presenting a programme of music by John Adams conducted by Adams himself. Featuring performances of the kaleidoscopic new concerto Must The Devil Have All The Good Tunes? and Lola Montez Does The Spider Dance from his opera Girls of the Golden West among others, don't miss this performance by one of the country's leading modern creators.

Born in 1947, Pulitzer Prize winner Adams' is seen as a leader in modern minimalist styles, building upon the work of contemporaries such as Steve Reich and Phillip Glass. Notable works include 5 operas, multiple film scores and Grammy Award winning compositions, including three for his 2002 composition On The Transmigration of Souls.

Sound good to you? Share this page on social media and let your friends know about Seattle Symphony - The Music of John Adams at Benaroya Hall.