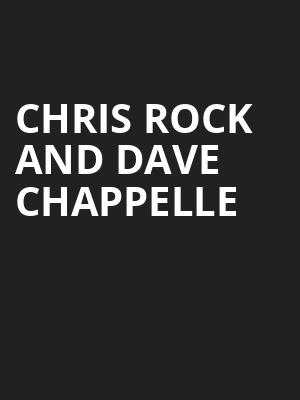 Photo by Bogomil Mihaylov on Unsplash

Two titans of American comedy team up for this historic tour, hitting the West Coast this December. Both lauded in their own right for their contributions to comedy, this co-headlining jaunt gives fans the opportunity to enjoy a set from each of these iconic comedians. Kicking off at San Diego's Viejas Arena on December 1

Starting his comedy career in 1984, Rock was spotted by Eddie Murphy in New York, who gave the aspiring comedian his first film role in Beverly Hills Cop II. He later joined SNL, becoming known as one of the show's 'Bad Boys' alongside Adam Sandler, David Spade, and Chris Farley. With mainstream exposure garnered from the show, he spent the 90s and 00's switching between film roles and comedy, earning a name as a raw and unfiltered act, who is unafraid to delve into politics, race, and cultural issues. Now one of the biggest acts in the comedy world, he returned to touring in 2022, taking to the road solo with his first new show since 2017. Still controversial (The 2022 Oscars anyone?) and still undeniably hilarious, don't miss this legendary comic as he joins forces with Chappelle for what is sure to be an unfiltered and exciting event!

Beginning his comedy career in 1991 Chappelle quickly made a name for himself on the New York comedy circuit. Gaining popularity at an unprecedented pace Chappelle hit the big time with Chappelle's Show on Comedy Central in 2003. Featuring a range of different comedy sketches the Chappelle's Show garnered the star two Emmy nominations. However, the overwhelming popularity took its toll on the comedian. Becoming angry and upset at the direction his beloved show was going, Dave Chappelle quit and headed off to South Africa for some much-needed rest and reflection.

Over the next half-decade, Chappelle made a few rare TV and stand-up appearances until 2013 when he returned to the comedy circuit! Since 2017 Chappelle's career has hit milestone after milestone, winning two Emmy awards and two Grammy awards for his TV appearances and comedy albums.

No cellphones, cameras or recording devices will be allowed at this show. Upon arrival, all phones and smart watches will be secured in Yondr pouches that will be unlocked at the end of the show. Guests maintain possession of their phones throughout the night, and if needed, may access their phones at designated Yondr unlocking stations in the lobby. Anyone caught with a cellphone in the venue will be immediately ejected. We appreciate your cooperation in creating a phone-free viewing experience.

Seen Chris Rock and Dave Chappelle? Loved it? Hated it?

Sound good to you? Share this page on social media and let your friends know about Chris Rock and Dave Chappelle at Key Arena.