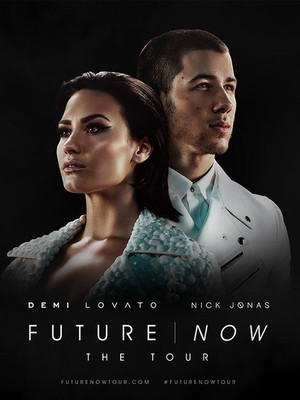 Demi Lovato and Nick Jonas have been close friends since their Disney Channel days, and now that they've both emerged as classy, grown-up pop stars, it makes sense that they should embark on a joint headlining tour. The Future Now tour runs for three months across North America, and it plays Key Arena in Seattle, WA, Closed August 21, 2016


After being introduced to the world in The Jonas Brothers movie Camp Rock, Demi Lovato became one of Disney Channel's biggest stars. She's released a ton of million-selling records, appeared as a judge on The X-Factor, and was chosen to sing the promotional version of Let it Go from Frozen. 2015 saw her release her acclaimed album Confident, which featured the singles Cool for Summer and the title track.

Demi's BFF Nick Jonas traded in the bubblegum pop of his Jonas Brothers days in 2014 for the cool, RnB sounds of his self-titled solo album. Among it's guest stars was (you guessed it) Demi!

Sound good to you? Share this page on social media and let your friends know about Demi Lovato & Nick Jonas at Key Arena.