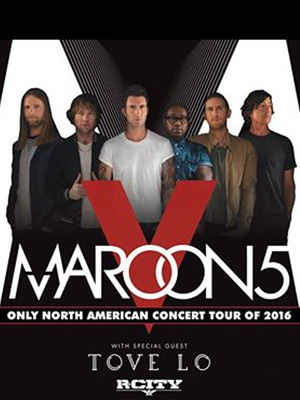 One of the biggest bands in the world, Maroon 5 dominate the airwaves with their hook-laden pop rock!

Clear your diaries in advance and hold onto your hearts, because Adam Levine will step out of your TV screen and onto the stage for a mammoth Maroon 5 US Fall tour in 2016, featuring Swedish songstress Tove Lo and hip-hop/reggae fusion duo R. City as support. The 'Moves Like Jagger' singer and his band of fellow heartthrobs will bring their effervescent, hit-filled catalogue of hook-laden pop rock to in , ,

Originally hailing from LA, Maroon 5 put themselves on the map with their debut album Songs About Jane in 2001 (a record that spawned the hit singles This Love, She Will Be Loved and Harder To Breathe). With five albums now under their belt, the outfit's sound has morphed from basic band set up to the undeniably catchy and polished pop that currently dominates the airwaves. Don't miss out on what will be THE tour of 2016.

Sound good to you? Share this page on social media and let your friends know about Maroon 5, Tove Lo & R. City at Key Arena.