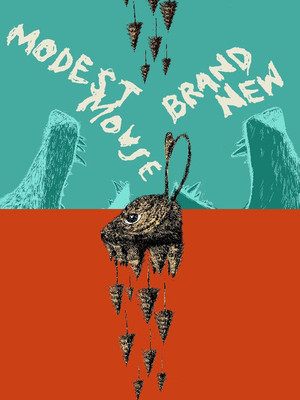 Arguably in the realm of indie royalty, Modest Mouse and Brand New cement their status with this co-headlining tour. No fanfare, no opening acts, just two incredible full sets!

Since 1993, Modest Mouse have been a by word for the ultimate in indie cool. With piercing and sometimes poignant lyric insights over crashing guitars, they made the mainstream with 1997's The Lonesome Crowded West but hit Platinum with 2004's Good News for People who Love Bad News that included alternative anthem 'Float On'. With multiple line up changes, including a stint for Smiths icon Johnny Marr, Modest Mouse have proven their staying power, with their most recent record winning acclaim from critics and fans alike.

The outfit's melodic brand of punk-pop has earned them a cult-following, one that grew exponentially with the release of their third album, The Devil and God Are Raging Inside of Me. The atmospheric and subtle depth of their bold sound is brilliantly juxtaposed with bursts of high-energy punk dizziness, translating to a riveting, animated spectacle of a live show. However, the elusive band are one of the most random when it comes to steady outputs of new material, so fans will be delighted to hear that in October they finally dropped the news that they are in the middle of recording album number five!

Sound good to you? Share this page on social media and let your friends know about Modest Mouse & Brand New at Key Arena.