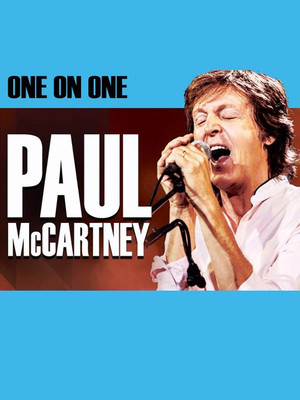 'One On One' promises to unveil a dazzling re-designed set, dozens of classics from the most beloved catalog in popular music, spanning Paul's entire career!

With a musical career spanning over 60-years and including countless industry awards, Sir Paul McCartney is one of the most iconic musicians of our time. An accomplished songwriter, bass player, an activist, vegetarian and producer, his achievements cross musical, cultural and philanthropic spheres and help give him such wide-reaching appeal as a musician and human-being.

Since parting ways with The Beatles in the 1970s, McCartney has focused on developing his solo career as well as collaborated with the likes of Stevie Wonder, Michael Jackson and the Royal Liverpool Philharmonic Society. His last solo album, New, was released in late 2013 and was yet another worthy addition to the man's luminous catalogue. His concerts will be packed full of his usual mix of solo material, tracks from his time with Wings and of course, the best of the Fab Four. Catch him live at in , ,

David Lavallee: “McCartney is the best concert ever. EVER !”

Paul McCartney without doubt is the best concert I have ever been to. The... more

Sir Paul is an insanely talented musician! He still has charm, wittiness... more

Sound good to you? Share this page on social media and let your friends know about Paul McCartney at Key Arena.