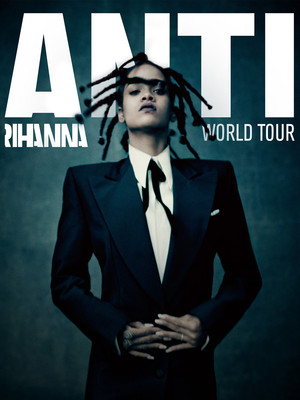 Pop icon Rihanna embarks on a massive world tour in 2016 in support of eight studio album Anti. Executive produced by Kanye West, her new album was written with a whole load of big name collaborators, including Paul McCartney and X Ambassadors, and is yet another hook-filled, eclectic collection of stylish pop, and includes the singles 'American Oxygen' and 'Bitch, Better Have My Money'.

Since bursting onto the music scene with 'Pon de Replay' back in 2005, the Barbadian singer has gone onto become one of the best-selling artists of the modern era. Easily changing up her style between lovelorn ballads and dance ready anthems, her best known tracks include 'Umbrella', 'Only Girl (In the World)', 'Take A Bow' and 'We Found Love'. Expect to hear all her classics, alongside a wealth of new material, when the Anti tour (with support from rapper Travis Scott) plays Key Arena in Seattle, WA, Closed April 24, 2016

Sound good to you? Share this page on social media and let your friends know about Rihanna & Travis Scott at Key Arena.