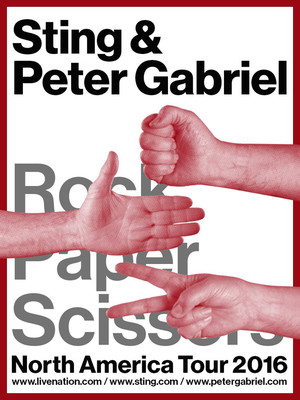 Their royal highnesses Sting and Peter Gabriel have both been towering figures over the British (and world music) scenes for over three decades now, and seeing as they both have a reputation for forays into left-field musical choices (see Sting's lute music album in particular) they make perfect touring companions. This is their first set of joint dates since the 1980s, when they played a series of shows in support of Amnesty International.

Their 2016 Rock Paper Scissors tour will see the pair perform separately and together, exploring their own and each other's catalogues. The experimental air will be enhanced by a diverse group of backing musicians. "I think people will be intrigued" said Sting. Yes we are! Catch 'Roxanne', 'Sledgehammer', 'Fields of Gold' and much more when the legendary duo play Key Arena in Seattle, WA, Closed July 21, 2016

Sound good to you? Share this page on social media and let your friends know about Sting & Peter Gabriel at Key Arena.