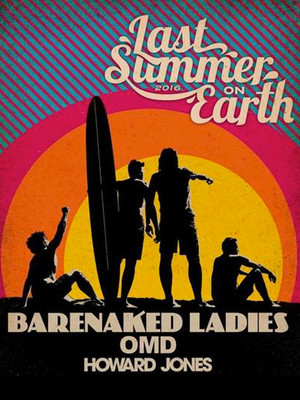 Barenaked Ladies are back and headlining their annual Last Summer On Earth Tour for 2016, bringing synth pop outfit Orchestral Manoeuvres In The Dark (OMD for short) and English singer-songwriter Howard Jones along for the ride! The Canadian alt-rockers first cultivated a cult following during the 1990's and quickly became the country's finest music export, selling over 15 million albums worldwide to date. Catch them at Marymoor Amphitheatre in Redmond , WA , Closed July 16, 2016

Fusing a range of genres (from hip-hop to acoustic pop) together to create upbeat anthems and melodic jams (see ubiquitous smash hit of the 90s One Week), the band is still going strong despite the departure of lead singer Steven Page in 2009, with fellow founding member Ed Robertson stepping up and filling his shoes. Known for their high-energy performances (audience rock outs are encouraged), Barenaked Ladies are living legends not to be missed!

Sound good to you? Share this page on social media and let your friends know about Barenaked Ladies, Orchestral Manoeuvres In The Dark & Howard Jones at Marymoor Amphitheatre.