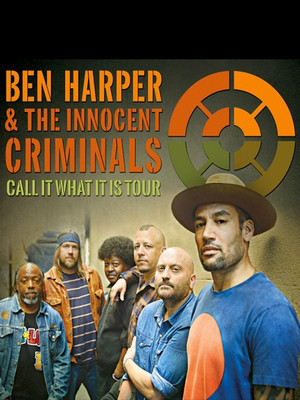 2015 saw the reunion of blues rock troubadour Ben Harper and his band of merrymaking musicians The Innocent Criminals after a seven year hiatus. Known for combining an acoustic aesthetic, a groove-laden funk sensibility and reggae-tinged soul, Harper and his long-standing backing crew have recently set industry tongues wagging with a holy anticipated album in the pipeline, so expect new material on the Call It What It Is World Tour, coming to in ,

As their reunion shows proved, they're back on form after their wilderness years with critics heavily praising the band's rock heavy jams and softer, hymnal moments. The sell-out, chanting crowds echoed these sentiments and it's easy to see why; virtuosic and nuanced playing from the band perfectly balances with Harper's gritty, emotion-filled energy. Don't miss out on a chance to see this prodigal band in their prime!

Sound good to you? Share this page on social media and let your friends know about Ben Harper & The Innocent Criminals at Marymoor Amphitheatre.