Sorry! You missed Cake and Ben Folds at Marymoor Amphitheatre 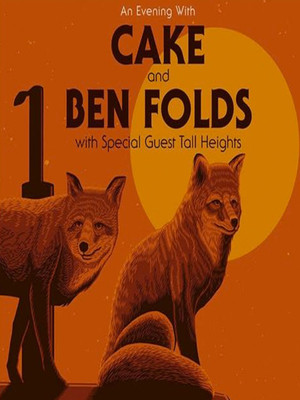 Cake shows are always fun. They're not dangerous (like a punk show), and they're not boring (like many shows); they're just plain fun.

Why See Cake and Ben Folds?

Cake and Ben Folds are combining their talents once again for a nationwide tour kicking off in September and this time, they're bringing along electrofolk duo Tall Heights. Last year, Cake and Ben Folds hit the road together on a successful East Coast tour, this time the two bands head along the Pacific Coast.

Alternative rockers Cake formed in the '90s and released their latest album 'Showroom of Compassion' 8 years ago. The album was recorded in a solar-powered studio in Sacramento and debuted at number 1 on the Billboard 200 Albums chart. Their upcoming album 'Age of Aquarius' is expected to be released this year.

Singer, songwriter and producer Ben Folds went solo after five years as the frontman for band Ben Folds Five and toured the world as a solo artist. The singer has gone on to be inducted into the North Carolina Music Hall of Fame and receive a star on the Music City Walk of Fame in Nashville, Tennessee.

The good: Tall Heights was great, both as an opening act and backing band... more

TJ: “Should have left before CAKE”

Front row, got to see the surprisingly impressive Tall Heights and Ben... more

Sound good to you? Share this page on social media and let your friends know about Cake and Ben Folds at Marymoor Amphitheatre.