Sorry! You missed Flight of the Conchords at Marymoor Amphitheatre 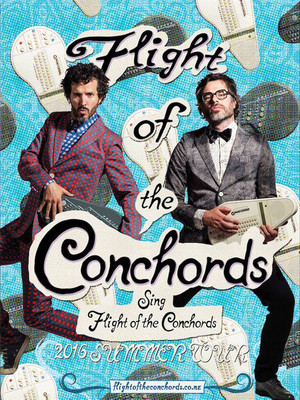 Flight of the Conchords

Bret and Jermaine are both present and ready to rock

Why See Flight of the Conchords?

They're Gonna Rock The Party

Bret? Present. Jermaine? Present. Yes, the Grammy Award-winning Flight of the Conchords are back! The New Zealand duo are heading out across North America on a brand new tour, their first since co-headlining 2014's Oddball Comedy & Curiosity Tour. In even more exciting news, they have new material to play!

A cult sensation in their native land, Flight of the Conchords won the hearts of America with their 2007 HBO series, which detailed their song-filled adventures in New York City as they sought fame and fortune, guided by their useless manager Murray (present). Catch Bret McKensie and Jermaine Clement play all the hits, from 'Business Time' and 'The Humans are Dead', to 'The Most Beautiful Girl (In The Room)' and 'The Prince of Parties', as well as brand new tracks, when they hit Marymoor Amphitheatre in Redmond, WA, Closed June 22, 2016

Seen Flight of the Conchords? Loved it? Hated it?

Sound good to you? Share this page on social media and let your friends know about Flight of the Conchords at Marymoor Amphitheatre.