Sorry! You missed Weezer & Panic! At The Disco at Marymoor Amphitheatre 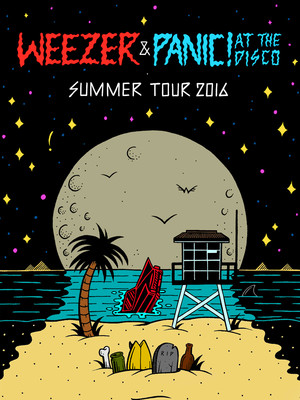 Weezer & Panic! At The Disco

Why See Weezer & Panic! At The Disco?

Two of alt and indie rock's most versatile bands are hitting the road together this summer. With Weezer about to release a new album (their 10th!) this spring and Panic!'s Death of a Bachelor getting rave reviews, we're sure this is going to be and audio-visual feast! With support from Andrew McMahon.

Since first forming in 1992, Weezer has been the go to all American alt-rock band, defining a generation with their Blue Album, which contained the mega-hits 'Buddy Holly, 'Say it Ain't So'. Nine more albums down the line (including the cult smash Pinkerton) and Rivers Cuomo has convinced us that, despite his super-nerd exterior, within beats the heart of a stone cold, sardonic rebel. Their last record, Everything Will Be Alright in The End was immediately hailed as their best this century, a feat they'll likely surpass with the release of The White Album this spring.

Despite occasionally removing the exclamation point from their name, Panic! are still the glitter covered adventreres of old. Sweeping in on a wave of guyliner and snark, their 2005 album A Fever You Can't Sweat Out, set them apart from their emo contemporaries, as well as spawning a litany of Annoyingly Long Song Names. Their second effort Pretty.Odd was a surprising outing that took after Sargent Pepper rather than the Black Parade and has lent them staying power. Swaggering, witty (think Queen-meets-the-Beach Boys) their latest release Death of A Bachelor is another satisfying outing.

Sound good to you? Share this page on social media and let your friends know about Weezer & Panic! At The Disco at Marymoor Amphitheatre.