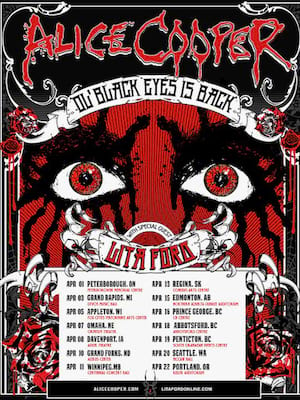 It's a pure Alice Cooper show with the snakes and guillotine and the straight jacket, but there's a bunch of stuff you haven't seen before - there's a 13-foot Frankenstein. It starts in fourth gear and stays the... It's like a freight train and every sin

Legendary rocker Alice Cooper is hitting the road on a North American trek with his new tour "Ol' Black Eyes is Back". The consummate rock and roll showman will be joined by Runaways legend Lita Ford for this exciting Spring jaunt. But don't you worry, if we know Alice, there will be plenty of chilling, thrilling antics!

No one defined shock rock like Alice Cooper. Cooper used violent (and vile) theatrics - simulated executions, the chopping up of baby dolls, and draping himself with a live boa constrictor - and explicit lyrics to become a controversial yet hugely popular figure in the early-and-mid 1970s. He's mellowed a bit since then, becoming somewhat of an elder statesman of the rock world, with an enviable back catalog of hits including 'School's Out', 'Elected', No Mr. Nice Guy' and I'm Eighteen'.

Without Alice Cooper, there might never have been the NY Dolls, KISS, Marilyn Manson, Nine Inch Nails, Motley Crue, Slipknot or Rob Zombie ... maybe not even David Bowie, or at least not Ziggy Stardust.

Would love to meet him in person. I have been to his Resturant in Phoenix.... more

From the time the lights first went down until the close of the encore... more

Sound good to you? Share this page on social media and let your friends know about Alice Cooper at McCaw Hall.