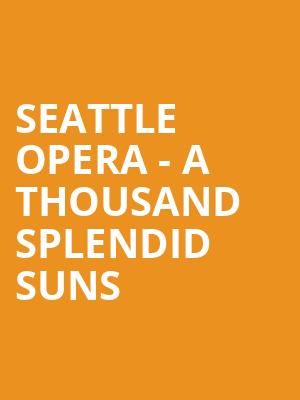 There has never been a more important time for this story to be taking the stage and shared with American audiences.

Reborn For The Opera Stage!

The best-selling novel by Khaled Hosseini is reborn as a full-scale opera. The family-based epic explores the lives of three generations of Afghan women, thrown together by the bonds of marriage, family, and secret pasts. With music by Sheila Silver and a libretto by Stephen Kitsakos, A Thousand Splendid Suns is set to take the opera world by storm. But before it does, don't miss out as it enjoys a world premiere right here in Seattle! The production is directed by Roya Sadat, one of Afghanistan's first female film directors. This brand new production is part of the Seattle Opera's 2022/23 season.

What is A Thousand Splendid Suns about?

Set in Afghanistan, Miriam and Laila are two women under the legacy of war and the brutality of the Taliban regime. When family tragedy brings them both together, they find themselves united by an evil that lurks much, much closer to home. It is a story of female strength and the redemptive love of family, no matter how you come to be so.

You might recognise Khaled Hosseini's other novel, The Kite Runner.

Three hours with one interval

Sound good to you? Share this page on social media and let your friends know about Seattle Opera - A Thousand Splendid Suns at McCaw Hall.