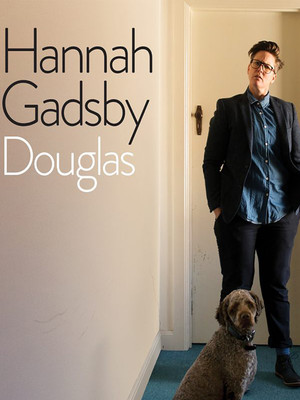 A name you should probably know, or if you don't you will soon enough, Hannah Gadsby took the comedy world by storm with her Award-winning show entitled Nanette. A sold-out Edinburgh Fringe run and a Netflix special later Hannah Gadsby returns to the stage with her brand new show, Douglas.

Inspired by her dog, Douglas sees Gadbsy discuss the success that Nanette had, and what she learned in its aftermath. Blisteringly funny and unapologetic, Gadsby is Comedy's shiny 'new' star and this Tasmanian wit shows no sign of being a 'one-hit-wonder'.

Debuting at the 2017 Edinburgh Fringe Festival critics dubbed Gadsby's Nanette a game-changer, overturning the conventions of comedy and bringing a new style and voice into a somewhat overcrowded market. Openly talking about gender, equality, anger, homophobia and art Nanette was supposed to be Gadsby's final farewell to stand-up, luckily for us, it seems she has now overturned this statement (phew!).

A name that you're sure to be hearing more of in the future, don't miss your chance to see Hannah Gadsby live!

Having seen "Nannette," I did know what to expect -- and nevertheless found... more

Sound good to you? Share this page on social media and let your friends know about Hannah Gadsby at Moore Theatre.