Sorry! You missed Latin History For Morons at Moore Theatre 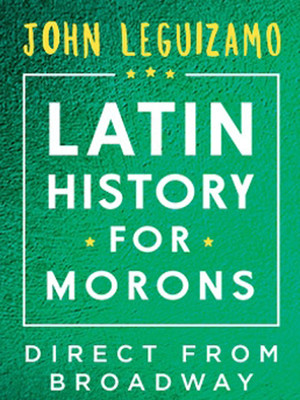 Why See Latin History For Morons?

After two sell-out runs in New York, Tony and Emmy award winner John Leguizamo returns to the stage with his critically acclaimed Latin History For Morons! Debuting at the Public Theater back in 2017, Leguizamo's "funny and surprisingly poignant" (New York Times) one-man show transferred to Broadway's Studio 54 the same year, garnering a Tony nomination in the process!

Latin History For Morons marked Leguizamo's sixth return to Broadway with the star already garnering a Tony nomination for his 1998 self-written and self-starring Freak. Tony Taccone returns to the production to direct.

What is Latin History For Morons about?

110 minutes with no intermission

Images are taken from the original Broadway production.

Seen Latin History For Morons? Loved it? Hated it?

Sound good to you? Share this page on social media and let your friends know about Latin History For Morons at Moore Theatre.