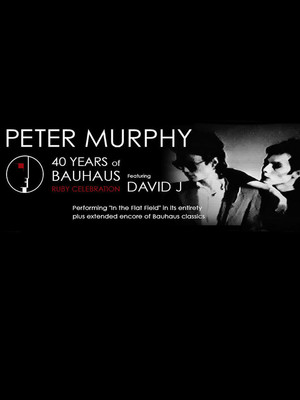 Peter Murphy returns to the stage in 2019 as he celebrates 40 years of gothic rock powerhouse Bauhaus. Joined by fellow bandmate and bassist David J. Murphy the head out on the '40 Years of Bauhaus Ruby Celebration Tour' in an extensive world tour which stretches from Poland to Germany to the USA to Canada!

The perfect event for any Bauhaus/ Peter Murphy super-fan the iconic front man will play the band's debut album In The Flat Field in its entirety, before playing the quartet's most iconic singles like Bela Lugosi's Dead', Kick in the Eye', and She's in Parties'. The Flat Field became an underground hit with hitting the number one spot in the UK Indie Album charts and catapulted the band into fame.

Don't miss your chance to see the iconic Peter Murphy live on this rare tour!

Some venues are age restricted, check with the venue before purchasing tickets.

Obnoxious, hissy-fitting Peter at his blandest. David J was great, though. more

He was being an obnoxious jerk, throwing his megaphone because it wasn't... more

Sound good to you? Share this page on social media and let your friends know about Peter Murphy at Moore Theatre.