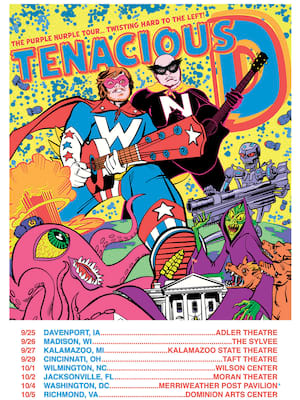 KG and JB are back to rock your socks off!

the purple nurple tour... twisting hard to the left!

Jack Black and Kyle Gass, AKA the mighty Tenacious D, are returning to ROCK the stage! After five years of sitting on their couch, JB and KG blew the dust off their guitars and hit the road last year for a series of dates across America. And this year sees them making another return, but this time with a Purple Nurple twist.

Tenacious D have teamed up with 46 For 46 and will be examining the divisive times we live in, in a typically Tenacious way, whilst hoping to inspire non-voters to register to vote and have their voices heard.

Formed in LA 1994, Tenacious D consists of lead vocalist and guitarist Jack Black and lead guitarist and vocalist Kyle Gass. The band first gained popularity in 1997 when they appeared in their television series; The Adventures of Tenacious D.2001 saw the release of their debut album, and the single 'Tribute' was the bands most successful being their only track to reach Top 10 in any charts. By 2006 the band had grown greatly in strength, the duo starred, and recorded the soundtrack for the incredible and hilarious film 'Tenacious D: The Pick of Destiny.

Tenacious D put on two amazing shows! JB and KG were awesome and their... more

The D rocked that MF down more

Sound good to you? Share this page on social media and let your friends know about Tenacious D at Moore Theatre.