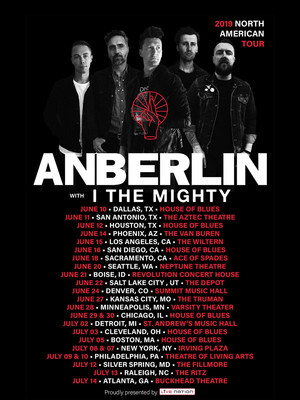 The Floridian alt rock quintet return for their first tour in five years!

Anberlin Return From A 5 Year Hiatus

Formed in Winter Haven, Florida in 2002, alt rock quintet Anberlin burst onto the scene with an exciting, decidedly darker alt rock sound than the sunny climes of their hometown. For twelve years, the band became one of the hardest working in rock, releasing seven albums and touring constantly, until they called it a day with their final album Lowborn and an extensive farewell tour.

Luckily in 2018 Anberlin reunited for a one-off show, opening the floodgates of calls to reunite for good. With their fans in mind, the outfit are hitting the road on their first full tour in almost five years and playing career-defining songs from across their fuzz-laden album catalogue. San Franciscan prog rockers I The Mighty are set to join Anberlin for the 22-date trek as support.

Seen Anberlin? Loved it? Hated it?

Sound good to you? Share this page on social media and let your friends know about Anberlin at Neptune Theater.