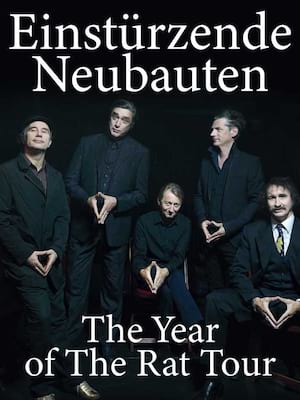 This band, like nearly no other, has managed to create a musical cosmos. It has, in fact, built up its own genre by uniquely combining edgy sounds with sophisticated poetry.

German experimental band Einstuerzende Neubauten formed in West Germany in 1980, the group consist of Blixa Bargeld, N.U. Unruh, Alexander Hacke, Jochen Arbeit, and Rudolf Moser and are known for defying traditional genres with their innovative sound. The band has released 11 studio albums and their latest 'The Year of the Rat' will coincide with this nationwide tour where they will be performing new music live.

The band's experimental nature is also a part of how they perform. They use custom-built music instruments built from scrap metal to produce a harsh and unique sound. Einstuerzende Neubauten named their tour and album after the year of the rat in the Chinese Zodiac to symbolize ingenuity and versatility. This tour marks 40 years in music for the band.

Sound good to you? Share this page on social media and let your friends know about Einstuerzende Neubauten at Neptune Theater.