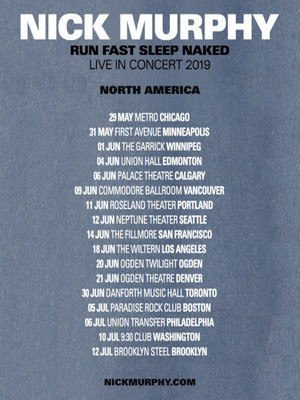 Australia's current golden boy of mellow electro-pop is not just a brooding bedroom musician. He also knows how to work a crowd and a set list.

Nick Murphy heads out for summer shows across North America

The artist formerly known as Chet Faker plays a run of summer dates across the USA and Canada in support of his latest album Run Fast Sleep Naked. The Australian electronica musician begins in Minneapolis on May 31st, with the comprehensive tour continuing throughout June and July.

Run Fast Sleep Naked is Murphy's first full-length effort since dropping the 'Chet Faker' moniker in 2016, under which he rose to international attention with a cover of Blackstreet's No Diggity featured in a 2013 Superbowl commercial for Becks. His debut album Built On Glass went certified platinum in Australia and Run Fast Sleep Naked shows a marked, fresh evolution of the unique sound brought by the debut.

Sound good to you? Share this page on social media and let your friends know about Nick Murphy (Chet Faker) at Neptune Theater.