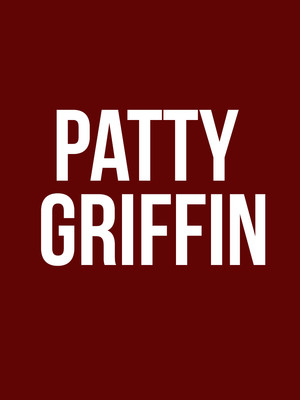 It's clear her writing remains as surprising as it is masterful.

THE QUEEN OF AMERICANA

Patty Griffin is the sweetheart of folk and gospel, and she will be hitting town on the in , , . Her first studio album, Living With Ghosts, was released in 1996 and received critical acclaim (it featuring only Griffin and her acoustic guitar). Her music style is particularly revered for its stripped-down songwriting, and is mainly centered around folk music. Many of her work has been covered by musicians including Emmylou Harris, Ellis Paul, Rory Block, and the Dixie Chicks, and constantly receives praise from her peers including Willie Nelson.

Her 2013 album is Servant of Love, marked her 10th studio release and her first on her self-owned label imprint, in collaboration with Thirty Tigers and Craig Ross.

Her release previous to that, American Kid was a heartfelt, stripped down album in tribute to her recently deceased father to whom she was close. She described it as cathartic and allowed her to let him go. Later that year, the lost album Silver Bells (lost in 1998 due to a record company merger) finally saw the light of day and also received critical praise.

Griffin has also worked with British musician Robert Plant on his 2010 solo album Band of Joy, and for three years rumours persisted that the pair were secretly married. Although the marriage itself turned out to be a red herring, the romance did fizzle out in 2013 albeit amicably, leading to speculation that the pair may possibly work together again in the future.

Sound good to you? Share this page on social media and let your friends know about Patty Griffin at Neptune Theater.