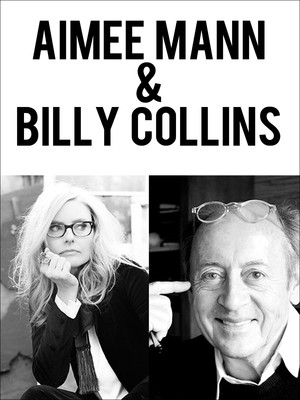 The singer and former Poet Laureate talk through their creative process

Delve into the creative process with these two greats of poetry and song. Grammy Award winning artist Aimee Mann and former United States Poet Laureate Billy Collins come together for a night of live reading and acoustic performance, and conversation.

One of the nation's foremost singer songwriters, Aimee Mann's been magicking up her lyrically dexterous rock since the early '90s. She really broke the mainstream when her music provided the inspiration for Paul Thomas Anderson's movie Magnolia, and her subsequent soundtrack work garnered her an Academy Award nomination. When she's not releasing critically acclaimed records, she's making cameos on the likes of Portlandia and playing delightfully silly Christmas shows with Ted Leo.

As poets go, they don't come much more distinguished than Billy Collins. Aswell as being appointed the national Poet Laureate from 2011-2013, Collins is a Guggenheim fellow and last year was awarded the Norman Mailer Prize for Poetry. Among his best known collections are The Art of Drowning and Picnic, Lighting.

Sound good to you? Share this page on social media and let your friends know about Aimee Mann & Billy Collins at Pantages Theater.