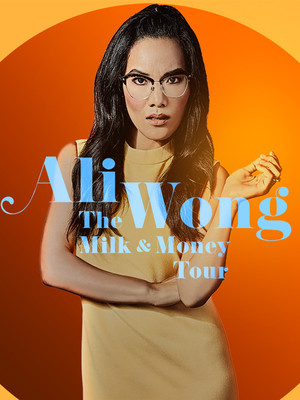 The Milk and Money Tour

San Francisco native Ali Wong is a comedian unafraid to leave no stone unturned as she confronts taboo topics with hilarious consequences. Sex, her marriage, pregnancy and more sex are topics she frequently sinks her teeth into, tearing into feminism and sexism with an unmatched voraciousness. She may seem like a demure mom of one when she first meets the eye, but Wong brass, bold, lewd and taking the comedy scene by storm.

The world first got a taste of her humour in the form of the 2015 TV series Fresh Off The Boat, in which she not also starred but honed her comedy writing skills. It wasn't long before Netflix picked her up for her own show, a one hour comedy special entitled Baby Cobra that featured the heavily pregnant Wong waxing lyrical about the joys of pregnancy (and all of the messy human bits in between!).

Sound good to you? Share this page on social media and let your friends know about Ali Wong at Paramount Theatre.