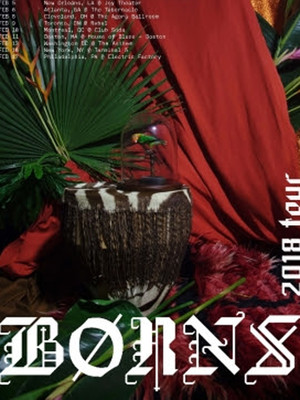 Dopamine, an album which touches on love, emotions, and sex all at once using catchy rhythms and synth-rock styles to make the album and interesting and melodic debut.

Borns Is Coming To Town!

Borns splashed onto the music scene back in 2015 with his electric album Dopamine. This debut album put Borns at the forefront of musical conversation, his eclectic sound and smooth melodies has presented Borns into the world of alt-rock and synth pop.

With hits like "Electric Love" and "10,000 Emerald Pools", Borns has already featured on countless festival line-ups as well as making many TV appearances, including being featured on PBS' Front and Center concert series back in 2016. Due to his continuous rise though the ranks of the music scene Borns is definitely a name to keep tab of, don't miss this rising star when he comes to your town!

Børns and his three openers all had simply amazing voices, but it was... more

Sound good to you? Share this page on social media and let your friends know about Borns at Paramount Theatre.