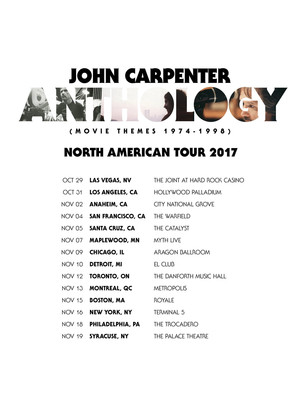 One of the great film directors of the 1970s and 80s, John Carpenters' contribution to sci-fi and horror is immeasurable, practically reinventing the genres multiple times with iconic flicks like Halloween, The Thing, Escape from New York and They Live. Carpenter also composed or co-composed the distinctive synthesizer themes for most of his films, with his score to Halloween in particular embedding itself in the nightmares of audiences the world over.

2017 saw Carpenter release a collection of his themes entitled Anthology, and he's taking this compilation on tour. Catch this film and music icon when he plays in , ,

Sound good to you? Share this page on social media and let your friends know about John Carpenter at Paramount Theatre.