Sorry! You missed The Bodyguard at Paramount Theatre 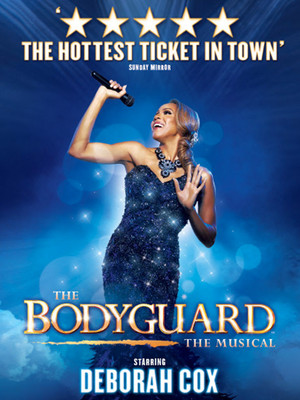 Why See The Bodyguard?

THE WEST END HIT COMES TO THE STATES!

Grammy nominated artist and musical star Deborah Cox will be bringing London's West End musical to the United States on its inaugural national tour! Based on the 1992 movie starring the late, great Whitney Houston and Kevin Costner, this musical follows a charged star-crossed love story between a soul diva and her personal bodyguard in the face of constant danger.

WHAT IS THE BODYGUARD ABOUT?

Following attempts on a young superstar's life by a sexually-obsessed stalker, former Secret Service agent turned bodyguard, Frank Farmer is hired to protect his new charge. But as Farmer discovers to his chagrin is that showbusiness works differently from life in the White House; his employer Rachel Marron is fiercely headstrong, stubborn and refuses to cooperate.

A romantically charged tug-of-war ensues, as both characters attempt to assert their authority; however, the last thing that they expected to happen was to fall in love.

A MUST FOR WHITNEY FANS

The 1992 blockbuster movie propelled Whitney Houston to superstardom, along with romantic lead Kevin Costner, and is revered as one of the best romantic thrillers in cinema. The Bodyguard features a multitude of Whitney Houston's greatest hits, including 'Queen of the Night', 'So Emotional', 'One Moment in Time', 'Saving All My Love', and of course, the iconic 'I Will Always Love You'.

The stage musical was already in development in 2012 when the news of Houston's untimely death in the February broke. The ensuing press coverage almost caused the initial lead actress in the London-based show, Heather Hadley, to pull out amidst fears of comparison with the late Houston.

Images are taken from the London production. Production images for this North American tour have yet to be released.

We saw it on Sunday. It was amazing. Would see it again. more

Absolutely Amazing! We completely enjoyed this play and our evening at... more

Sound good to you? Share this page on social media and let your friends know about The Bodyguard at Paramount Theatre.