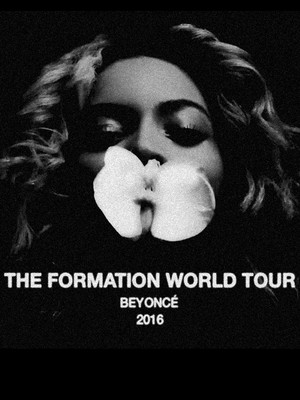 Who Runs the World? Beyonce.

She runs this. Queen Bey is back on the road with her first solo tour for three years. Announced moments after she upstaged Coldplay at this year's Superbowl, the Formation World Tour hits 40 cities worldwide throughout the year. An undisputed music icon, Beyonce's path to world domination has been assured ever since her Destiny's Child days. Since announcing her solo career with the horn-fuelled 'Crazy in Love' in 2003, she's built up one of pop's most impressive back catalogues, including 'Single Ladies (Put A Ring On It)', 'If I Were a Boy', 'Drunk in Love', 'Run the World (Girls)', and 'Halo'.

In recent years, she's taken her music in riskier directions, beginning with her sultry, darkly-hued self-titled fifth album, which was dropped without warning on iTunes, and continuing with this year's stunningly accomplished Lemonade album. Embracing her African American identity and Southern heritage, 'Formation' is a radical rallying cry that takes Beyonce to a whole new level. Catch it live when she hits CenturyLink Field in Seattle, WA, Closed May 18, 2016

Seen Beyonce - The Formation World Tour? Loved it? Hated it?

Sound good to you? Share this page on social media and let your friends know about Beyonce - The Formation World Tour at CenturyLink Field.