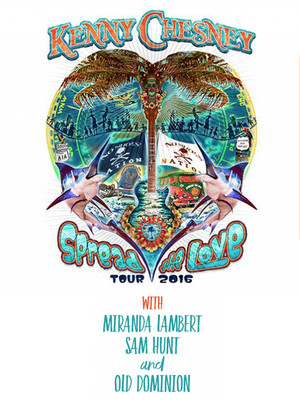 Kenny always knows how to put on a show

Kenny is bringing along a handful of very famous friends for his 2016 Spread The Love Tour, which, befitting his huge popularity, is hitting Stadiums only. Joining him are Miranda Lambert, whose acclaimed albums have taken her a long way from American idol, red hot newcomer and Grammy nominee Sam Hunt and Nashville five-piece Old Dominion. Catch them all when the Spread The Love Tour plays CenturyLink Fieldin Seattle, WA, Closed July 23, 2016

Hailing from Tennesee, Chesney is one of modern Country's most reliable entertainers, with his huge show rivalling the likes of Beyonce for theatrics and spectacle. His latest album was 2014's breezy, anthem-filled the Big Revival, so expect to hear lots of cuts from that alongside classic like 'Fall in Love, 'The Tin Man', 'Living in Fast Forward' and 'Out Last Night'.