Sorry! You missed At The Drive In at Showbox SoDo 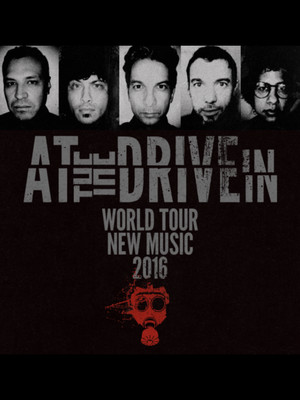 At The Drive In

The post hardcore titans are back together after a 15 year hiatus.

Why See At The Drive In?

AT THE DRIVE IN IS BACK AND HITTING THE ROAD

In what's shaping up to be the comeback of the century, At The Drive In is putting aside past differences to bring their noisy, landmark post-hardcore rock back to life for a reunion tour this Summer. After 15 years of radio silence and side-projects (The Mars Volta and Sparta to name just one), the quintet is returning armed with fresh music to boot. Catch them at Showbox SoDo in Seattle, WA, Closed June 8, 2016

Considered the forerunners of their genre, which is a heady mix of emo, noise and experimental rock, At The Drive In are known for a live show brimming with a sonic intensity and complexity combined with fast-paced lighting displays and a rock and roll swagger last seen in the early 70s. Wear some comfortable shoes, this one's a doozy!

High energy, beautiful new music, engaging, and nostalgic all at once! more

Sound good to you? Share this page on social media and let your friends know about At The Drive In at Showbox SoDo.