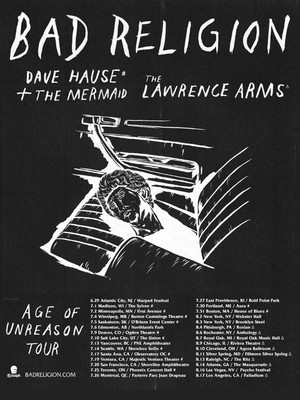 Back for the Age of Unreason!

Influential LA punk band Bad Religion hit the road this summer, in support of their 17th studio album, 'Age of Unreason'. An impassioned and powerful release, its a highly political work that urges us to seek the truth about the modern world - and ourselves.

Drawing inspiration from their punk forebears The Ramones, along with acts like The Beatles and Elvis Costello, Bad Religion were always one of the genre's more melodic and upbeat groups. The group originally formed in 1980 and went through several different incarnations and break-ups as they tried to find their signature sound. A fairly underground group in their first decade, Bad Religion found themselves beneficiaries of the Nirvana-led alt. rock boom of the early '90s and released a string of acclaimed albums, including Generator and Stranger Than Fiction to ever greater success.

First off, the staff was amazing. From the parking lot attendants, to the... more

Sound good to you? Share this page on social media and let your friends know about Bad Religion at Showbox SoDo.