Sorry! You missed Christine and the Queens at Showbox SoDo 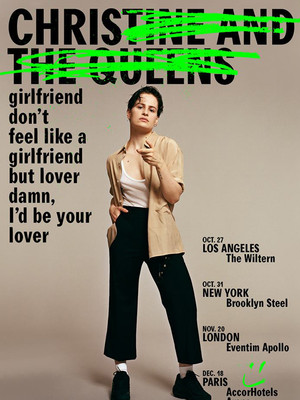 Christine and the Queens

The 'Tilted' singer is back with her new album

Why See Christine and the Queens?

The project of Heloise Letissier, Christine and the Queens return to North American shores in support of new album Chris.

Dealing in slinky electro-pop and effortless melodies, the French songstress first broke big across the Atlantic in the UK with her track 'Tilted' from her debut Chaleur Humaine, supported by a couple of stunning live television performances. She's since made it in the US, with her music appearing in everything from Better Things to Girls, and Chris promises to take her to a whole new level. Lead singles 'Doesn't Matter' and 'Girlfriend' suggest she'll be topping critics polls at the end of the year.

Seen Christine and the Queens? Loved it? Hated it?

Sound good to you? Share this page on social media and let your friends know about Christine and the Queens at Showbox SoDo.