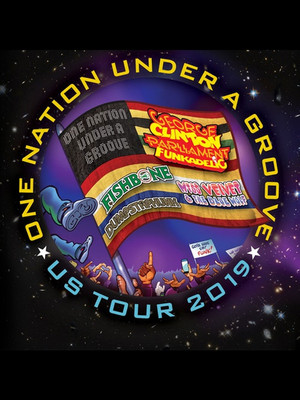 As a major architect of funk, George Clinton deserves a place in music history alongside James Brown and Sly Stone. His work injected inventive energy into the 70s with his albums as leader of the Funkadelic and Parliament outfits.

The end of an era is fast approaching! After five decades of bringing the groove to live audiences across the world, living legend George Clinton is retiring from life on the road and celebrating with one last blow-out tour. During the One Nation Under Groove Tour, Clinton will commemorate his influential music and career during one last outing with Parliament Funkadelic, the definitive, ever-evolving funk collective of the 70s.

Fusing together science fiction story lines with out of this world fashion, psychedelia, surreal humour and of course, grooves so funky they put blue cheese to shame, Clinton and his pioneering outfit was formed in the Doo Wop era of the 50s, but broke through to mainstream success by revolutionising R&B music under the influence of Hendrix, Zappa and Sly Stone. At the age of 78 years old, Clinton looks back on an extraordinary life and career, recalling the title of his career-defining 1978 album and smash hit single for the tour - its message of unity is as important today as it was in the band's heyday.

Well it would be an understatement to say that George Clinton and the... more

Sound good to you? Share this page on social media and let your friends know about George Clinton and Parliament Funkadelic at Showbox SoDo.