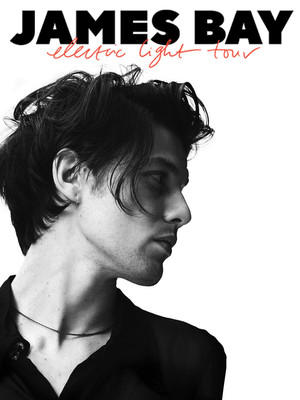 "Whether it's through his confessional lyrics, which wrestle with the hopes and regrets of escaping a small town, or the starker, emotional songs of yearning, there's an entrusting core that must be, for him, liberating, and is, for the listener, heartwa

Rising Rock God, James Bay takes on the US!

Hailing from the sleepy town of Hitchin, just outside of London, it's clear that James Bay was made for much grander things - his soulful, gravel-toned vocals and expertly crafted ballads have made waves since 2013 and was hotly tipped by the international music media as one of 2015's ones to watch. Well that prophecy certainly came true. He now hits the road in support of his second album, Electric Light, which features recently released singles 'Wild Love' and 'Pink Lemonade'.

Perhaps his best known song is the powerful, up-tempo 'Hold Back The River', a single that's solidified the young troubadour's status as a force to be reckoned with. His debut album, 2015's Chaos and The Calm, aptly describes his song-writing style translating to a live set brimming with raw energy. Outbursts of emotion are underpinned by softer, more intimate moments, marking the fledgling artist as wise beyond his years.

Sound good to you? Share this page on social media and let your friends know about James Bay at Showbox SoDo.