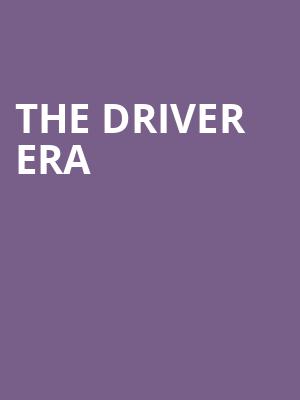 Their stylistically unpredictable music conjures up every romantic association with heading out on the open road: limitless possibility, the thrill of escape, a refusal to stay in one place for any real length of time.

Why See The Driver Era?

Former members of pop rock band R5, Lynch brothers Rocky and Ross launched their alternative rock duo The Driver Era early 2018. The two-piece sees Ross Lynch on lead vocals and Rocky Lynch on lead guitar who jointly write, perform and produce many of the tracks together. 2021 sees them take to the road on their debut nationwide tour.

The sibling's debut single 'Preacher Man' came out in 2018. A year later, the duo's debut studio album 'X' was released and labeled as a project that "brings punk rock grit to advanced production technique, straddling the scruffy edge of alternative and pop" by L'Officiel USA.

Seen The Driver Era? Loved it? Hated it?

Sound good to you? Share this page on social media and let your friends know about The Driver Era at Showbox SoDo.