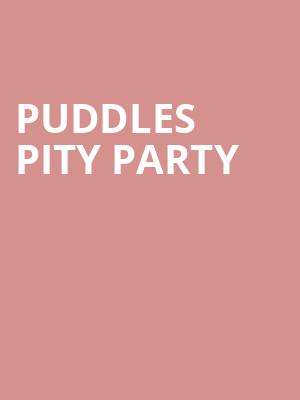 Pagliacci by way of Pee-Wee Herman and David Lynch

Puddles Pity Party is back!

The alter-ego of super-sized baritone and Kingsized band leader Mike Geier, Puddles has been a mainstay of the Atlanta entertainment scene since 1998. The six-foot-eight inches entertainer has come to international fame with his heartfelt renditions of famous songs and distinctive whiteface clown costume.

An enigmatic figure, he is known for not taking interviews in character but has performed at various festivals in both the USA (Adult Swim's Aqua Teen Hunger Force's tour in 2010) and at countless worldwide comedy festivals, including the renowned Edinburgh Fringe Festival.

Known as the "sad clown with the golden voice", the soulful singer is most famous for his cover version of Lorde's smash single, "Royals", which garnered an astonishing 19 million views on Youtube.

90 minutes with no intermission

Some venues are age restricted, please check with venue before booking tickets.

It was wonderful! This was the second time I attended a Pity Party and... more

Marcy Tita : “A voice to spend time with.”

His voice is worth every inconvenience. Our drive was over an hour,... more

Sound good to you? Share this page on social media and let your friends know about Puddles Pity Party at Showbox Theater.