Sorry! You missed The Fratellis at Showbox Theater 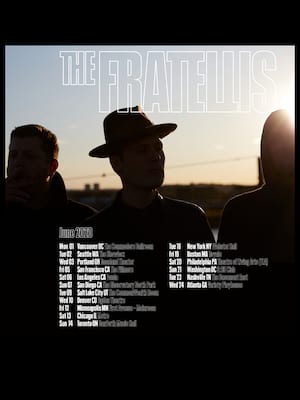 ...they haven't lost their knack for super-catchy melodies that could be bellowed by a crowd

Why See The Fratellis?

The Fratelli's Half Drunk Under A Full Moon Tour

The Fratellis are hitting the road on a long-awaited tour of North America this summer. Timed to coincide with the release of the Scottish indie-pop outfit's sixth studio album Half Drunk Under A Full Moon, the tour sees the celebrated act sow their hook-laden, hip-loosening and dance-friendly sonic offerings from coast to coast for the first time in two years.

Known for high energy performances that call to mind the height of the garage rock revival scene of the early 2000s, when the band came to the fore. Having toured and released records relentlessly throughout their 15-year tenure, the veteran Glaswegian trio regularly transforms a simple live gig into an electric release featuring much singing, dancing and moshing from enthusiastic audiences. Wear comfy shoes and keep an ear out for seminal songs like Chelsea Dagger, Henrietta and, Flathead.

Seen The Fratellis? Loved it? Hated it?

Sound good to you? Share this page on social media and let your friends know about The Fratellis at Showbox Theater.