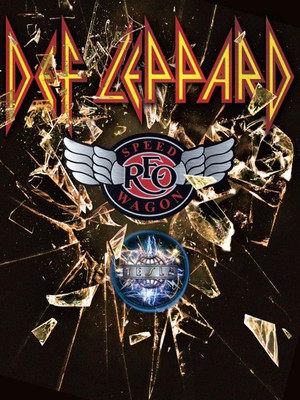 Icons of the British Heavy-Metal revival and frontrunner of contemporary Pop Metal Def Leppard return to the road after postponing a slew of dates in the winter to let singer Joe Elliott get some rest. Formed in the English city of Sheffield, Leppard's best known album is 1987's Hysteria, which contained the smash 'Pour Some Sugar On Me', which remains their most iconic track. The album hit 12 times platinum in US sales and sold over 25 million copies worldwide.

Leppard are in no danger of slowing down and continue to tour relentlessly, filling stadiums to capacity and playing as hard as ever. They're joined on these extensive series of dates by fellow hard-touring rockers REO Speedwagon ('Can't Fight This Feeling, 'Can't Stop Loving You') and Tesla ('Modern Day Cowboy'). Catch this amazing trip of bands when they all hit Tacoma Dome in Tacoma, WA, Closed October 1, 2016

Sound good to you? Share this page on social media and let your friends know about Def Leppard, REO Speedwagon & Tesla at Tacoma Dome.