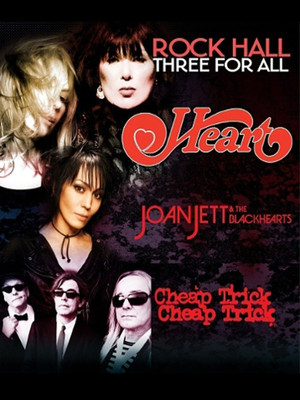 Why See Heart, Joan Jett and The Blackhearts & Cheap Trick?

Rock Hall Three For All Tour

Two of the greatest female-led rock icons of the 1980s are heading out together on the Rock Hall Three For All Tour in 2016. Jett, former member of The Runaways and best known from tracks like 'Bad Reputation' and 'I Love Rock N Roll', was inducted with the Blackhearts into the Rock and Roll Hall of Fame in 2015. Veteran rockers Heart joined the roster in 2013.

Joining them are Cheap Trick, who were inducted into the Hall this year! The band have now been together for some 40 years, during which they've more or less defined the 'pop rock' genre. Tracks like 'Surrender' and 'I Want You to Want Me' showcase their enviable skill at combining earworm, bouncy melodies with hard rock riffage. Catch this trio of greats when the tour plays White River Amphitheatre in Auburn, WA, Closed August 26, 2016

Sound good to you? Share this page on social media and let your friends know about Heart, Joan Jett and The Blackhearts & Cheap Trick at White River Amphitheatre.