Sorry! You missed Rob Zombie, Korn & In This Moment at White River Amphitheatre 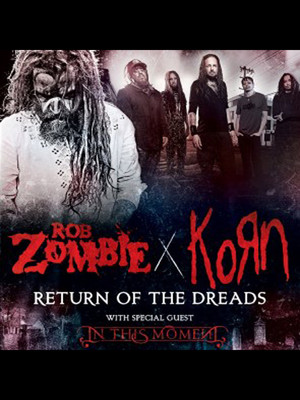 Rob Zombie, Korn & In This Moment

Why See Rob Zombie, Korn & In This Moment?

The Metal Tour of the Year

Rob is joined on these dates by nu metal icons Korn, who alongside the likes of Limp Bizkit, pioneered the alternative metal boom of the 1990s with tracks like 'Got the Life' and 'The Freak on the Leash'. The band are currently working on new material, which guitarist Brian Welch has promised is gonna be the heaviest Korn have sounded in a long time. Rounding out the bill on this tour are In This Moment. They all hit White River Amphitheatre in Auburn, WA, Closed July 27, 2016

Sound good to you? Share this page on social media and let your friends know about Rob Zombie, Korn & In This Moment at White River Amphitheatre.