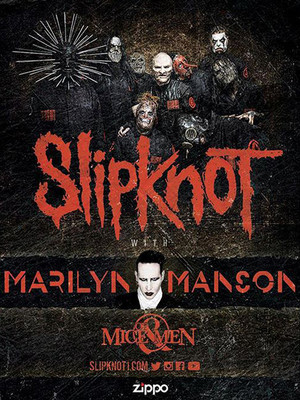 Why See Slipknot, Marilyn Manson & Of Mice and Men?

2016's metal tour is here. The masked men of Slipknot are heading across the country, with none other than Marilyn Manson! Of Mice and Men round out the bill. Catch them all when they play White River Amphitheatre in Auburn, WA, Closed August 11, 2016

Juggernauts of heavy metal, icons of nu-metal, Slipknot returned to the fold in 2014 with the furious .5: The Gray Chapter following a six year hiatus. There's rumours of a new album coming this year, so expect to hear some new material at these dates. Lord of darkness Marilyn Manson is just coming off the back of a co-headlining tour alongside The Smashing Pumpkins. A modern metal icon, Manson trod a menacing path through the 90s, with his industrial metal sound and gothic stage persona turning him into a lightning rod of controversy and parental outrage. His latest record, The Pale Emperor, was hailed as a return to form.

Sound good to you? Share this page on social media and let your friends know about Slipknot, Marilyn Manson & Of Mice and Men at White River Amphitheatre.